Start a Wiki
Thanatos - The Ultimate Legion, is one of the Legions of Chaos.

Thanatos is the first legion owned by Sieg Wahrheit. In its Adult and Perfect Forms, Thanatos is the largest legion in terms of size. This legion is quite unique in the sense that instead of increasing the number of members in its legion, it matures as the level of its Force increases.

The player begins with Thanatos (in Adult Form) as their first legion; however, the legion is soon lost after Victor Delacroix shatters the legion's Crest into nine Crest Fragments at the end of the Prologue stage. Delacroix then scatters the nine fragments across the world map. The player will then have to collect all nine pieces in order to summon Thanatos again.

The first stage quite easy as this massive monster towers over all opponents in the first stage and makes short work of them. At the beginning the game, the player possess the Thanatos Legion (in its Adult Form). This helps you to complete this stage easier than without a having a Thanatos Legion by your side. This legion is effective against ALL types of monsters. It is best to summon Thanatos when your are about to fight hordes of enemies as Thanatos will smash anything in your way, and what a show that is, you almost feel sorry for your enemies; NOT! A bonus feature about this legion is that it can teleport short distances, thus making it very hard for other monsters to hit it. At the end of the first stage (Prologue), however, Delacroix shatters the Thanatos Crest into nine fragments and scatters them around the world. The player will have to find all nine fragments in order to revive Thanatos. Once the player has collected all nine fragments, he/she will be able to summon Thanatos again. Unfortunately, Thanatos will no longer be in its Adult Form but rather in its smallest and weakest form: Baby Form. The player will have to level up the legion in order for it to regain power (NOTE: This legion's Force and Enchant are the most expensive to level up out of all other legions, so rather concentrate on Force than its Enchant).

Level 1: At this level, Thanatos is in its Baby Form

Level 2: At this level, Thanatos is in its Juvenile Form

Level 3: At this level, Thanatos is in its Adult Form

Level 4: At this level, Thanatos is in its Perfect Form

Since Thanatos Matures each time you level-up its Force, its Force Attack differs according to the level.

Baby Form: Thanatos will appear right above an individual enemy and begin stabbing in with its tail.

Juvenile Form: Thanatos will move towards a nearby enemy and crouch its back. It will then quickly straighten its back up again (as if charging up) and release an invisible attack that strike the nearby enemy 4 to 6 times.

Adult Form: Thanatos will use its long, strong arms to clear the crowd in a combo of blows. It will hit the enemy to one side, warp to the other side and hit the enemy again (as if playing ping-pong); it will do this three or four times. Finally, it smashes the mid-air opponent into the ground.

Perfect Form: Thanatos will wrap its huge wings around itself. It will then bulldoze through the enemy, in a drilling spear motion, from right to left (or back to front), then from left to right (or front to back), from the top downwards, and finally, from the ground upwards. 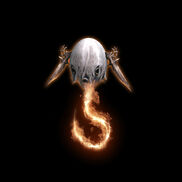 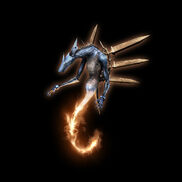 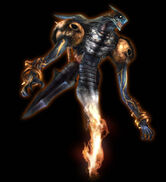 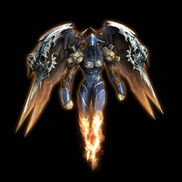 Thanatos In Perfect Form
Add a photo to this gallery

Ignorant Masses (300 SP): As Thanatos appears, the whole landscape's colour changes to the "Negative" colour and everything (except for Sieg and Thanatos) moves in slow motion. Thanatos begins to shoot homing missiles at the enemy that are capable of causing massive damage. The higher the level of Assist, the longer and more powerful this attack will be.

The table above depicts how much experience the Ultimate Legion needs to level up.﻿﻿

Retrieved from "https://chaoslegion.fandom.com/wiki/Thanatos?oldid=5675"
Community content is available under CC-BY-SA unless otherwise noted.